I took this photo almost a year ago.  When I took it I had the intentions of posting about my Grandpa, thinking then, our time with him here on Earth would be precious.  I started the post a number of times, trying to capture all the memories and stories he told us.  I never could find the right format I wanted to lay the story out in.  Now, I just want the words down somewhere, somehow, no matter how jumbled or out of order they may be.  And so, that's the way the posts about Grandpa Snaz, Robert, Bob, Bobby will be, random thoughts, random everything. 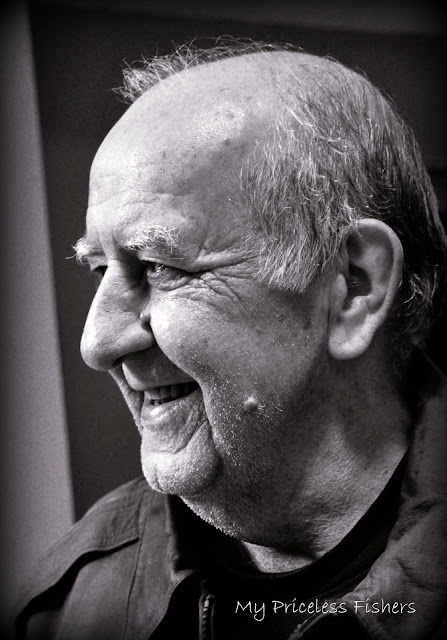 Yesterday, December 30 my phone rang at 8:50 AM, I thought it was probably my friend Susan.  {We like to catch up in the morning if we can.}  Instead, it was my Dad, when he calls I mostly worry.  My Dad has been at Grandpa's side during this horrible health journey.  He sleeps at the hospital, drives him to his appointments, knows where he's been and what the road ahead might bring.

That's bad.  My Dad hasn't ever told me to come.  I also know that the only way he would tell me to come is if he thinks it could be the last time I would be able to come.
I made it to my hometown by 2:15 PM, driving through rain and then snow with freezing rain for a base.  Praise God for my safe arrival and thanks to all who prayed.
Grandpa is small in the hospital bed, curled up even smaller, sleeping finally.  Upon awaking he immediately knew who I was, despite all the morphine.  And for the rest of the day he was in and out of sleep or a heavily drugged state all of which was good at this point as the night prior and morning were filled with a pain like no other.
In talking with him this morning he said he has nurses with him at his assisted living residence all through the night prior.  Then finally at about 7:00 AM he said he couldn't handle it any longer and needed to go in.  They brought him via ambulance.  The doctor today confirmed he had a "big heart attack"  Most likely still is.
Here's the rundown:
He is scared.  He is scared.  He is scared.
We are sad.
I spent the night with him here at the hospital and hope to be able to spend a few more days before returning home to my family.  I pray that I will be able to come back soon.
Would you please keep him in your prayers?  Thank you and God Bless.
Posted by Tina Fisher at 10:39 AM
Email ThisBlogThis!Share to TwitterShare to Facebook