I was offered a free gift Oplatki.  I was very thankful, of course, and then wondered "what is Oplatki?"

It seems I've missed the boat on this completely and I graciously thank Ian Rutherford of Aquinas & More to have aided me in the newest tradition of the Fisher home.

Thankfully the following was enclosed with the Oplatek wafes:

The Oplatki Tradition
Following time-honored tradition, many families will begin their Christmas Eve celebration by waiting for the appearance of the first star in the early evening sky as they look toward the East.  This first star appearing symbolizes the Star of Bethlehem which announced that the Great Light was coming into our world, to the "people who lived in darkness"
The table at which the family gathers for the Christmas Eve dinner typically has some straw strewn beneath a fine white tablecloth to commemorate the birth of the Christ Child in the manger cave where the animals lived.  A more modern adaptation included the use of straw or sprigs of evergreen which are placed on a serving platter and then covered with a fine white napkin on which the Oplatki wafers rest.
The Christmas Eve meal begins with the eldest member of the family taking an Oplatek wafer, breaking it and sharing it with the family member next to him.  Each then shares pieces of the Oplatek wafer with everyone else present at the table.  Some families, particularly of the Slovak tradition, share the Oplatek with honey on it, as a symbol of the sweetness and joy of the occasion.  The sharing-ritual is accompanied by embracing and the exchange of good wishes.  The symbolism of sharing the wafer with each person, and then back and forth, symbolizes the giving and the sharing in our lives.

You can read the whole story at www.AquinasAndMore.com/oplatki

The Oplatki wafers I received are off white and pale pink with different depictions embossed on each side. 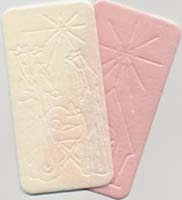 I plan on doing this with the Oplatki wafers we received after Mass on Christmas Eve.  I have additional Oplatki wafers I could try and mail to you or you can purchase your own at www.AquinasAndMore.com.
Posted by Tina Fisher at 9:47 AM
Email ThisBlogThis!Share to TwitterShare to Facebook