My baby turned five last Sunday.  If I wasn't reminded daily that he's getting bigger, I don't know if I could believe it.  To me, it seems like just yesterday we were telling our parents that we were going to have a baby.  Now, five years later our family is blessed beyond belief, our eldest marking five years. 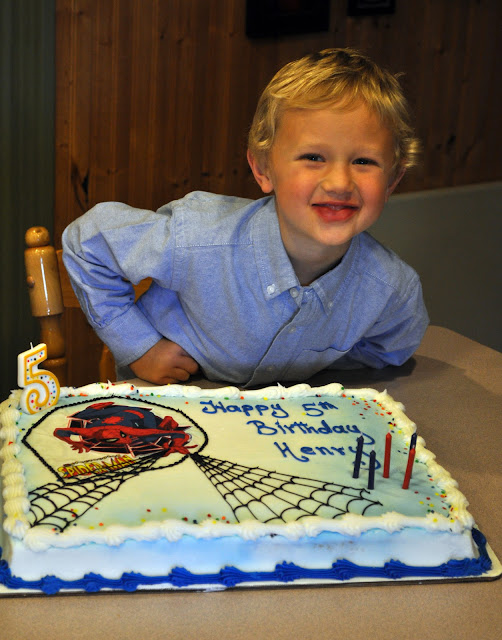 We had family and close friends over for lunch﻿ on Sunday.  I really like the cooking part but as you can see by the cake, I am not much of a baker.  It stresses me out too much and the cakes I have made never turn out they way they should.  I've skipped cake baking and found a famous (in the county) bakery that worked quite well.  I am just really hoping that one day one of my kids will love cheesecake so much they will request it.
Henry didn't have a kid birthday party this year.  Even though many of the kids in his pre-school class are having them, we decided that we would wait for that when he's in Kindergarten.  Cousins and friends, there are kids a plenty.
One of the only things Henry requested for his party was a pinata.  {Which secretly worked out good because we were able to unloaded some of the Halloween candy!}  The pinata was just about to break after all the kids took a couple of whacks, me, being the smart Mom that I am, I thought it would be a good idea if Henry could give Spidy the final blow.  Was I wrong.  Once Henry got the idea that his hits were delivering candy and his crazy mother was telling him to keep hitting it, all the kids were getting the candy and he was not.  So, he threw the bat down and ran off crying.  Poor kid.  Silly Mom.  Dad finally got him back and one of the big kids finished Spidy off.  Yeah candy! 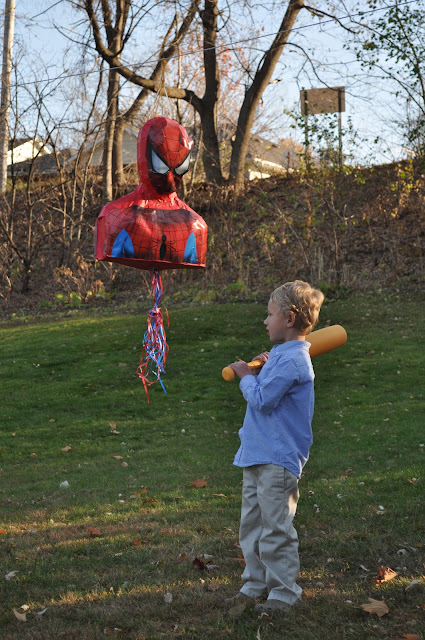 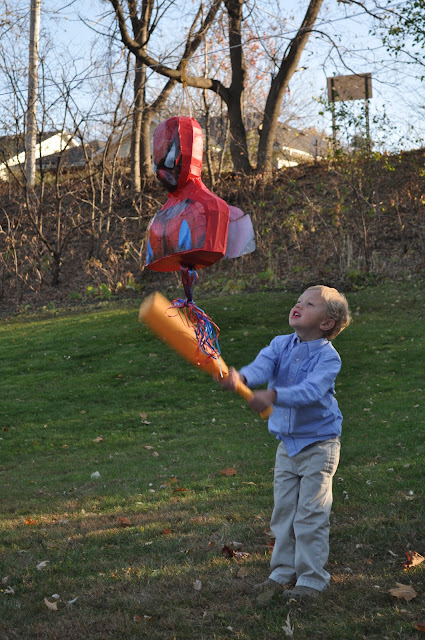 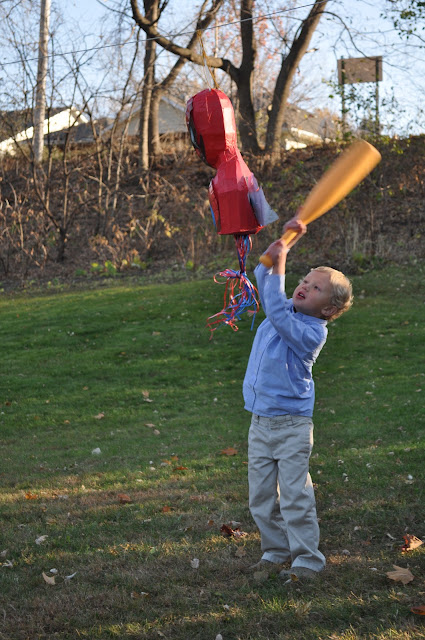 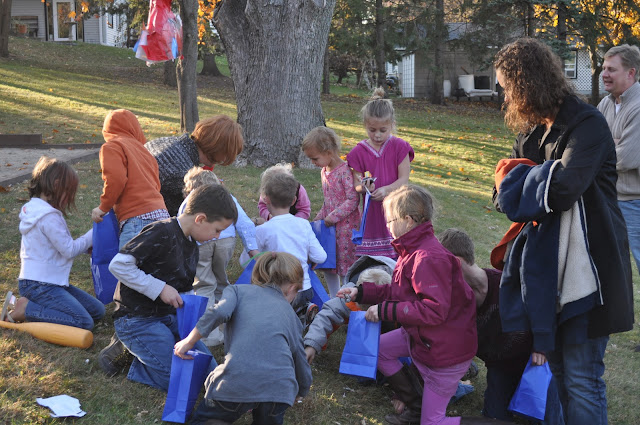 This birthday was a little harder for me than the past four.  When Henry turned one I cried, while getting ready, secret tears throughout the day and when I watched him sleep in his crib that night.  I wondered if all mothers went through this or was it because I was seven months pregnant?  I would bet it comes and goes through the years.  This year was another one of those years.  He's just gotten so big, smart, courageous, kind, great helper and even more loving ever day.  I am amazed every day at the things he says, does and how he interacts with others.  He's such a blessing and I feel so incredibly gifted to be his mother.  I am reminded by this boy and his sisters how loving God really is.  As well as how generous Adam by work hard so I can be home with our children.
Henry didn't have school on Monday which was nice.  We all enjoyed the morning hanging out, not going anywhere for a change.  I received a boy education in Lego's.  This is a very time consuming endeavour learning how to build Lego's.  It was hard to let the work pile up but worth every minute.
Happy 5th Birthday Henry!  We love you so much!
Posted by Tina Fisher at 2:52 PM
Email ThisBlogThis!Share to TwitterShare to Facebook