We have a about six weeks completed in going gluten free for Karley.  I think it's too early to tell if there have been any changes.  I say this because if there has been any growth, which I think there has, it would seem to me that there would be growth anyway.

Really the goal would be growth without it falling out rapidly.  That is hard to determine over six weeks.  We originally said we would do this for about three to four months and I can see that it would still be necessary to at least get to that point.

Overall, I can't believe how easy it has been.  As much as we could, we were not speaking about gluten free in front of the kids.  We would say that the doctor didn't want her to eat certain things so her tummy would feel better.  Then one night on our way home from a benefit the kids were asking for movie night and popcorn.  From the third row of the suburban, Karley who never said the words gluten free asked, "Mom, is popcorn gluten free".  I guess the cat was out of the bag and we were the last to know.  We don't really say why she's gluten free, but I guess she probably has figured that out too.  Kids are smarter than we think.  As I said, it's been very easy because Karley has been so good about this.  She doesn't ever complain about not being able to eat cookies when the other kids have them {I do always try and keep gf cookies} or when we are somewhere and she can't have something.  She was really good about not having her Valentine candy from school.  We are amazed at what a great sport she has been.

I have asked a couple of friends what they think of her progress.  The two comments I received was that her hair looked darker and thicker.  I would love your honest thoughts if you see any results.  If you don't see anything it's okay, really we'd rather not be gluten free so if it's not working, it's easier for us to not be gluten free.  But if we can help her with this by diet, we are all game.  As I said, we will keep going for a couple more months.

I did not edit these pictures beyond cropping.  I need to make sure I am getting better "same" shots.  I think my model doens't look too happy about doing this for me. 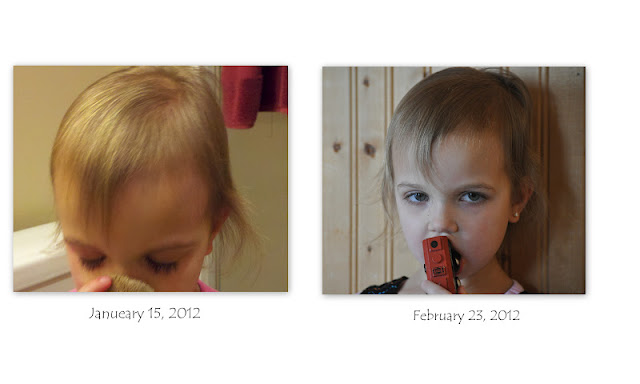 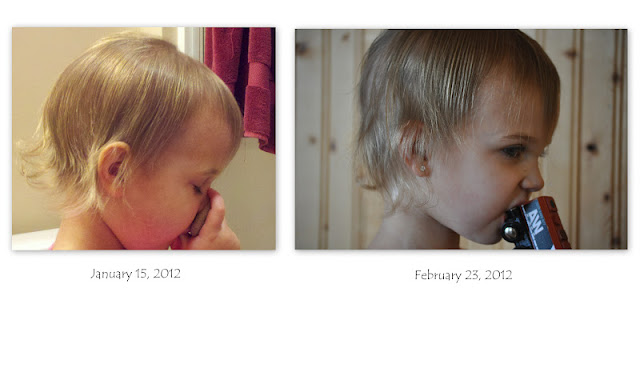 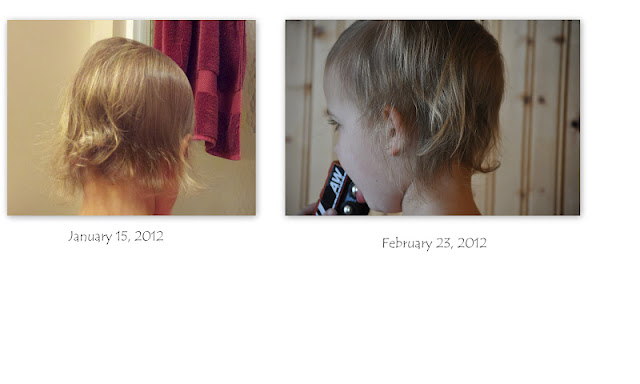 When I first looked I thought there was a lot of growth but the more I look the more I think not a lot has really happened.  I've been looking too much.

What do you think?

Tina
Posted by Tina Fisher at 2:47 PM
Email ThisBlogThis!Share to TwitterShare to Facebook